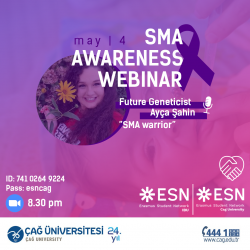 SMA disease is talked about a lot, but how much do we know? Why do we hear so much about SMA, which is a genetically inherited disease, what does it mean to be a carrier of SMA?
-What is SMA?
-What is an SMA carrier?
-SMA treatments?
-What kind of studies and supports are there for SMA?
-What can be done about this issue?
We look forward to your participation in the SMA Awareness Seminar, which will be given by Ayça Şahin, who has set an example for individuals with her struggle on SMA, where all these questions will be answered!